Peter is an organized person. He has his own rhythm and structure and process for handling his work. He prefers to work behind the scenes. Definitely not a person of many words or questions. A task is a task is a task. He is fully capable of receiving instructions and running with them. And he is a perfectionist.

One day, his boss assigned him an urgent task: To create an Excel sheet of new clients and prospects, for the Sales department. He delegated this task to him.

Peter was immediately excited, although you couldn’t tell by his demeanor. Excel always provided Peter with an unmatched type of comfort and tranquility. The logic and structure it exuded was calming to him. Peter took this delegated task at face value and there was no question about its purpose.

So, Peter tackled this task head on, in the only way he knew how. To plan out the task in excruciating detail. He even made a plan for his plan. He spent a long time on this.

And now he started editing and executing his plan. He arranged the columns and rows perfectly. Just so. He formatted the tables and got the colours just right, so that the colours of the tables coincided with the type of sales prospects on the list. He inserted formulas and locked cells, in order to eliminate any possibility for error, on the user’s part. His consideration was included in his plan. A tagging system. Probability of conversion bars automatically created based on classification of the lead. A marvel of sophistication.

But Peter kept on editing and editing.

After all, this task was all about providing intelligence to the Sales team. And he was proud of his diligence and his steadfast resolve on promoting unshakeable quality standards. He spent way too much time perfecting the Excel sheet and nearly missed the deadline because of this. Not to mention struggling to keep on top of all his other tasks. So, he did what he did best. He re-planned and re-prioritized based on logic, urgency, and importance.

But, this Excel sheet, well, you should have seen it. It was a true masterpiece. And Peter was very happy and excited about it. Proud.

The time had come.

After a grueling night of fixing this and that and tinkering even more with the colors, Peter eventually emailed his perfect Excel sheet to his boss. With a replied thanks, his boss simply forwarded the email to the Sales department.

Peter was deflated. His boss hadn’t seen the Excel sheet. No comment. No recognition of his hard work. But, he knew the praise would come once Sales started using it. Although he didn’t actively pursue recognition, not a behavior that was part of his core, he did want it.

In the Sales department, someone opened up Peter’s Excel sheet. They cut and pasted different sections of the tables into a Word document. And this changed the precious formatting. It wreaked havoc on all the beautiful and logical colors and formulas and font sizes, that Peter so lovingly designed.

The same person in Sales, then sends it out to all Sales representatives in the field, to print off in black and white and keep in their folders for personal review, when meeting a listed or new client.

That very night, Peter was reflecting on the effort he put into the Excel task. And he feels content. He feels relieved because he was able to proudly put his name on it. And he slept like a baby.

All that effort and quality work, down the drain, because of a compulsion to work to his own standards and not take the time to understand others’ expectations.

Do you know a Perfectionist Peter? Share this with them.

We can help them hack their behavior. Hack their growth. 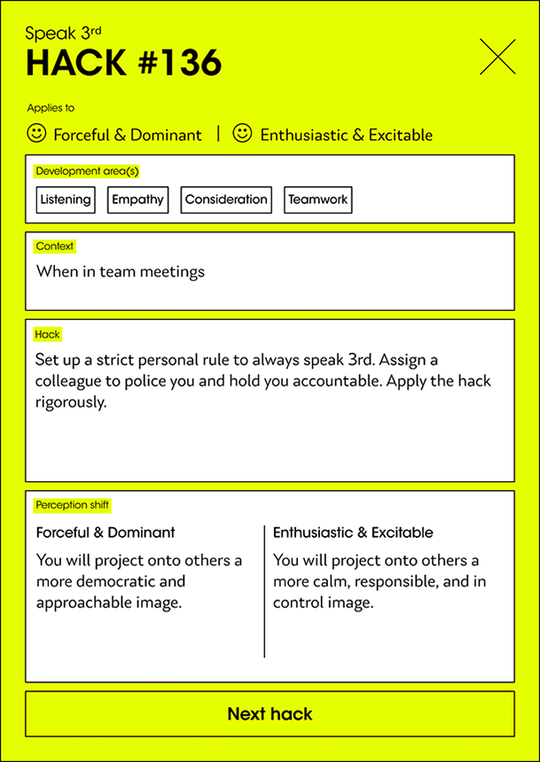